Hey Edgewood, what are you reading? 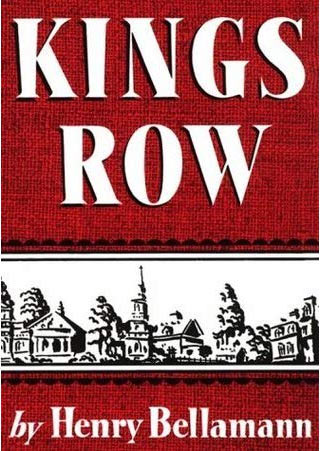 I love mid-twentieth century fiction, stuff like Sinclair Lewis’ Main Street and Babbitt, Winesburg, Ohio by Sherwood Anderson, John O’Hara’s BUtterfield 8 and Appointment in Samarra, and I was not disappointed when I finally got to Henry Bellamann’s Kings Row.  First, it’s a real doorstop, clocking in at 750+ pages, nearly Dickensian in length.

With the exception of BUtterfield 8, which is set in New York City, all the others are set in small towns, mostly in the Midwest.  And if you’re from a small town, these books hit home in a most unsettling way, as they expose the pettiness, cruelty, exclusiveness, hypocrisy of small Midwestern towns.

But, Kings Row is a little different in that it’s unremittingly bleak, and so much so, once the denizens of Bellamann’s home town of Fulton, MO finally figured who everybody was in the novel, he became persona non grata.  Apparently the feeling was mutual.  Bellamann hated his hometown.

That said, the book is a fiesta of social taboos: murder, incest, homosexuality (and the gay character is not negatively portrayed), racism, inter-racial romances, suicide, oh, and toss in a sadistic doctor, and certainly paved the way for lurid pot boilers like Grace Metalious’ Peyton Place.

Kings Row was a best seller, and was made into a movie, one starring Ronald Reagan and Ann Sheridan.  The movie has a happy ending.  The book, decidedly, does not.

Is it a great novel?  No.  The dialoges are weak, too much, “Oh, gosh, darn!,” stuff, but it’s interesting, and certainly an corrective to a too anodyne view of life in small town America.