Toothpaste, Radium, and the Golden Age of Radio 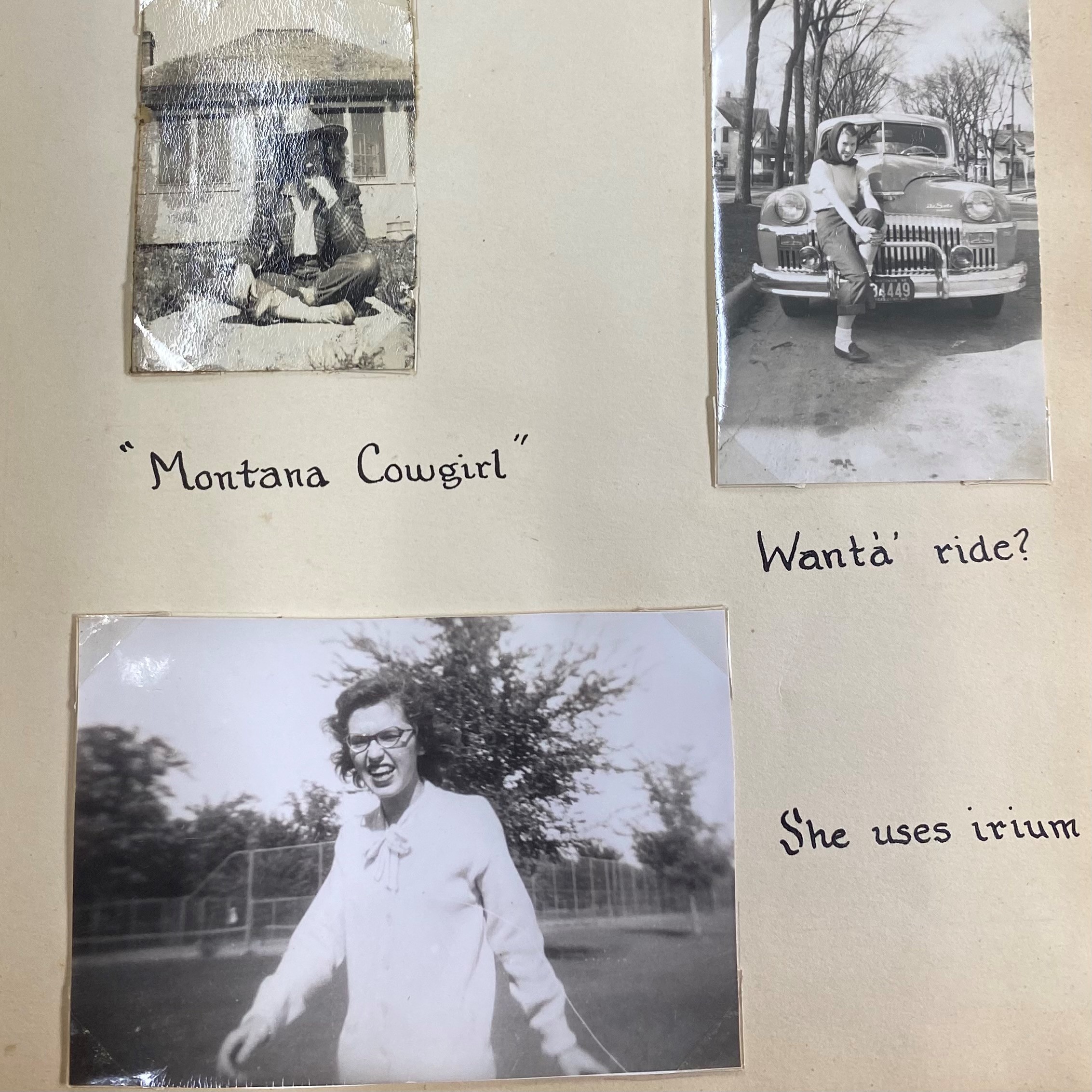 A cryptic caption in a scrapbook from 1940s inspired an archives quest with two research objectives: 1) Who is Irium Girl? And 2) was she poisoned by radium seventy-five years ago?

We found the caption “She uses irium” next to a photograph of a laughing woman with a bright smile. What on earth could irium be, and what had it to do with the woman in the photo? Upon realizing that irium sounds a bit like radium, and remembering that in the early 1900s, radium was a trendy health product, we got a little worried and did some frantic googling. Was this Edgewood College student poisoning herself with radioactivity?

As it turns out, radium-sounding names helped to sell all kinds of products even when they did not contain any radium. Besides, by the 1920s (well before this photo was taken) people had begun to connect radium to some truly horrible health problems.

Luckily for the student in the photo, irium does not actually exist! It is a made-up ingredient of Pepsodent Tooth Paste. Its name was a marketing contrivance designed to dazzle consumers into buying a product with a magic ingredient, and its use in the photo caption was probably a reference to the subject’s beaming white smile.

This photo is found in an album from the late 1940s, though. Radium’s ill-effects had been known for decades, thanks to some nasty cases of radiation poisoning that went public. The recent film Radium Girls (2018) traces a particularly famous lawsuit by factory workers whose job was to paint watch faces with glow-in-the-dark radium paint. They suffered notoriously and horribly as a result of ingesting radium on the job, and in a very public trial, sued their employers for poisoning in 1928. 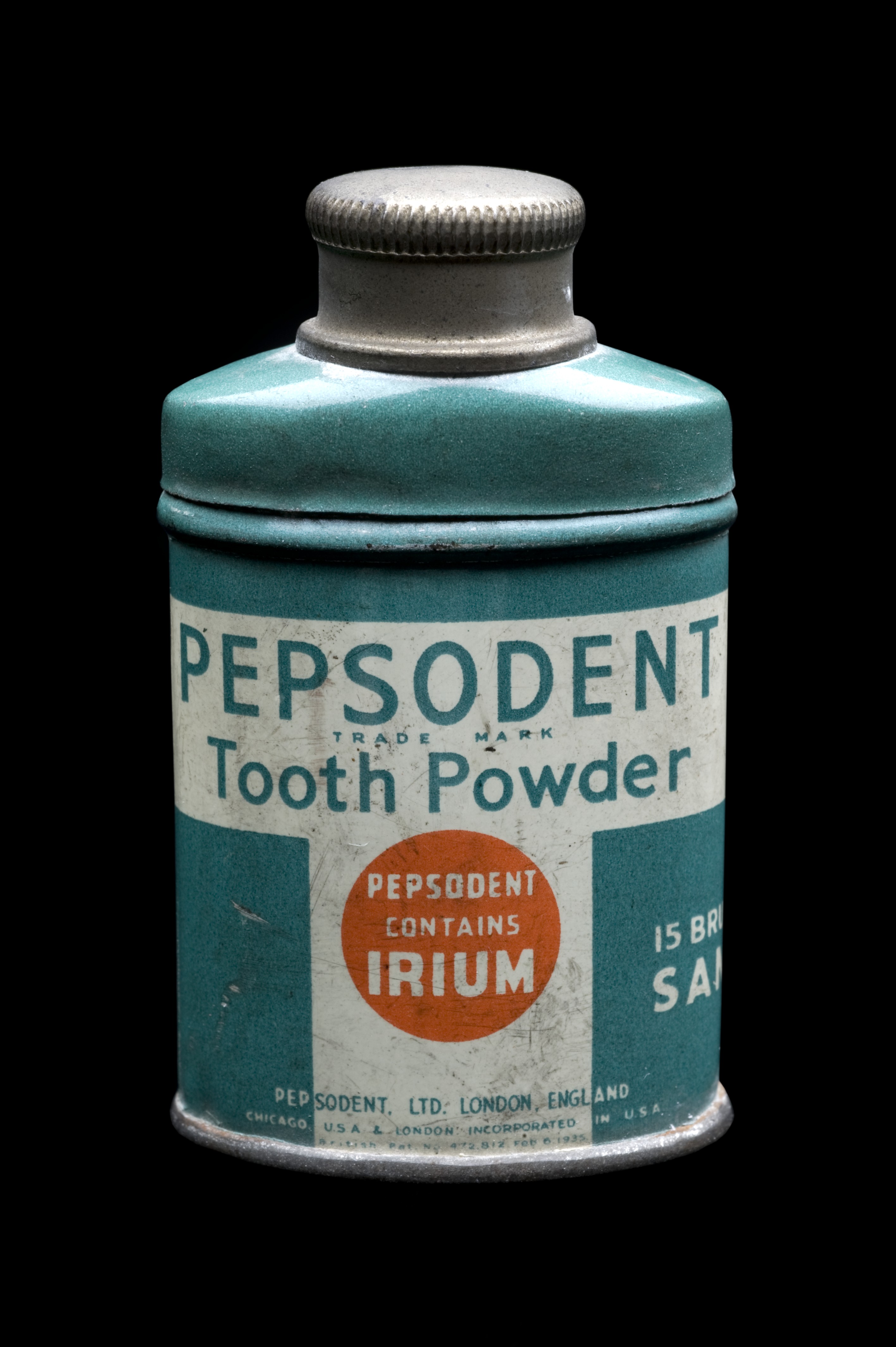 So why were people still talking about irium in Pepsodent toothpaste, twenty-odd years after the Radium Girls case made it quite clear that ingesting radium is bad? Pepsodent toothpaste became very successful indeed, but it did not do so on the strength of its magic ingredient alone. Instead, its fame was tied to popular programming from the Golden Age of Radio.

In 1929 Pepsodent used its Tooth Paste to sponsor the weekly radio show Amos and Andy which became extremely popular through the next decade; so popular, in fact, that movie theatres delayed the start of films that overlapped with the radio show’s timeslot. In 1938, the toothpaste moved on to sponsor The Pepsodent Show Starring Bob Hope, which ran until 1948.

Check out this short, interactive article, A Success Story: From Near Extinction To Top Selling Brand by Danny Goodwin by Danny Goodwin to read more about how the toothpaste rose to fame and the shows through which it found success. You can even listen to the advertising jingle featuring Poor Miriam, whose beau were frightened away by her icky smile -- until she started using Pepsodent Tooth Paste!  “Dear Miriam, poor Miriam, neglected using irium...”

Looking through objects from the archives, we often find things we don’t understand; missing labels, lost context, and unexplained references pique our curiosity. In this case, we had two mysteries to solve- the irium mentioned in the caption and the person featured in the photo. Who was Irium Girl? We combed the rest of the scrapbook in an attempt to find the answer.

The scrapbook in question is Marshallites-Towerites 1946-7 Volume IV, a scrapbook created by residents of the Tower and Marshall Hall at Edgewood College as “a treasury of well-known and well-loved faces and of many delightful festivities we shared together,” as it says in the hand-lettered Foreward. 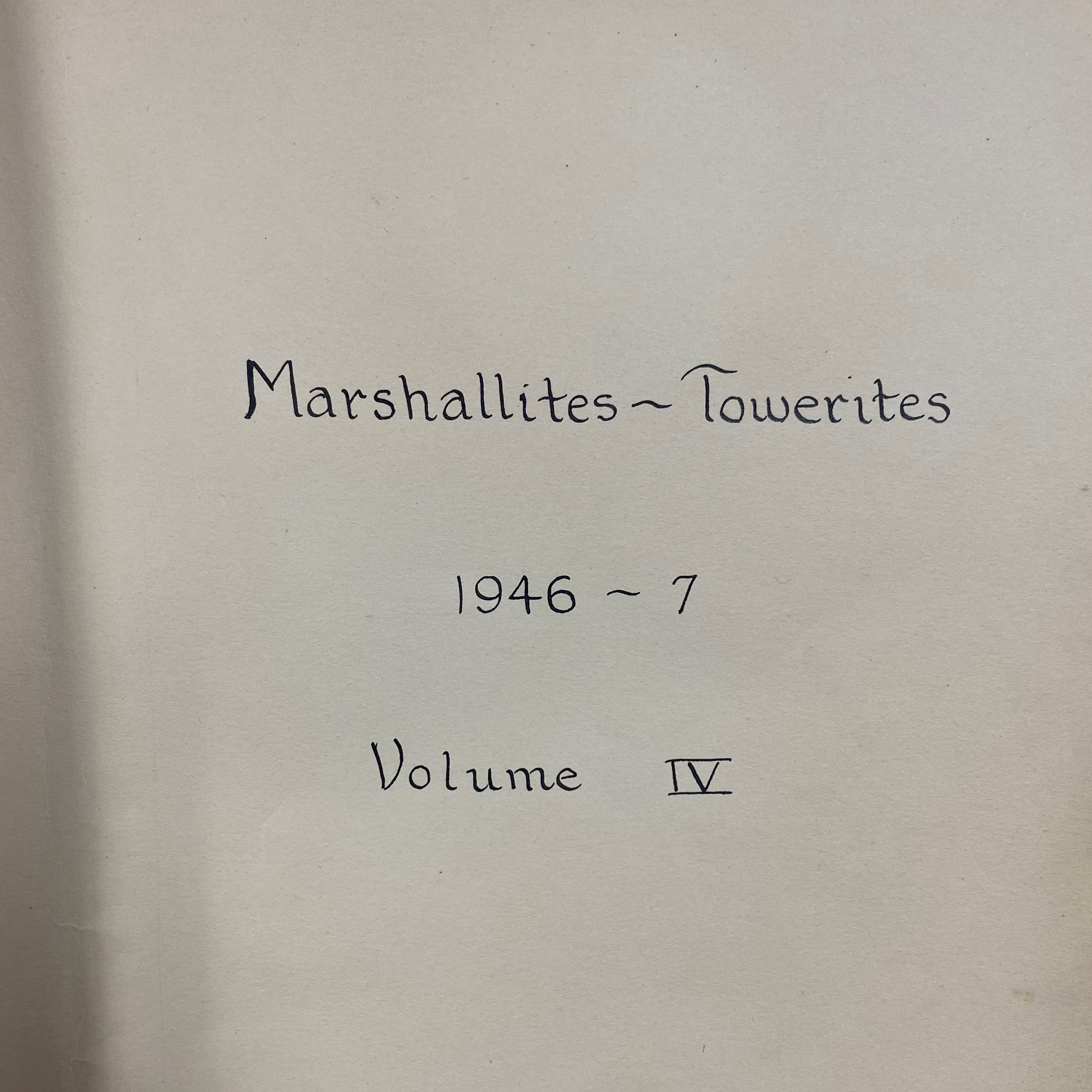 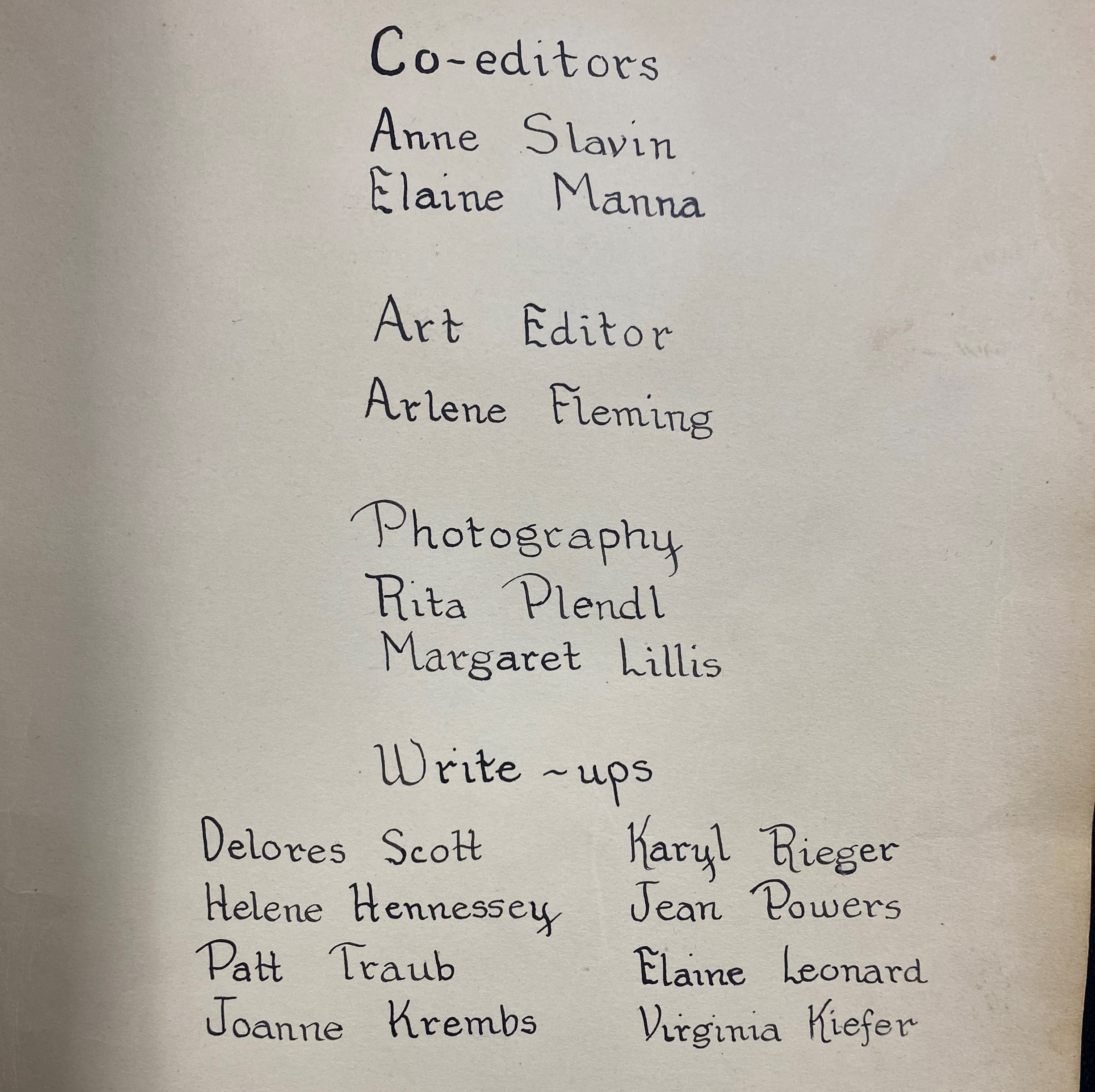 Each woman (Edgewood College was not co-educational until 1970) has a profile page with her room number, a headshot, and a writeup. A few memorable activities are noted and illustrated in the calendar section, and the rest of the pages contain black and white photographs fixed in photo corners and captioned by few words; the human subjects are seldom identified by name.

Among photos labeled simply (“the dance” and “winter sports”) are more playful captions: “A date with -- Gym” (four women in exercise clothes) and “I’m too beautiful for one man alone” (the subject standing at a distance with arms casually folded and ankles crossed, looking down at the photographer who stands below).

When the curious “She uses irium” caption caught our eye, we naturally wanted to know who Irium Girl was. Our detective work consisted of flipping the brittle pages of the album back and forth to compare profiles, muttering things like “is the nose right?” "I can’t see her eyebrows because she’s wearing glasses.” “No, this can’t be her. The chin is a different shape” until we arrived at the tentative identification of Irium Girl as Virginia Kiefer, resident in #7 Marshall Hall. Here is her profile, nicknaming her “Tomah’s Tops”.  She contributed to the writeups in the Marshallites-Towerites 1946-7 and was part of the staff of the Torch yearbook, too. (You can read about her other activities in our Digital Collections.) 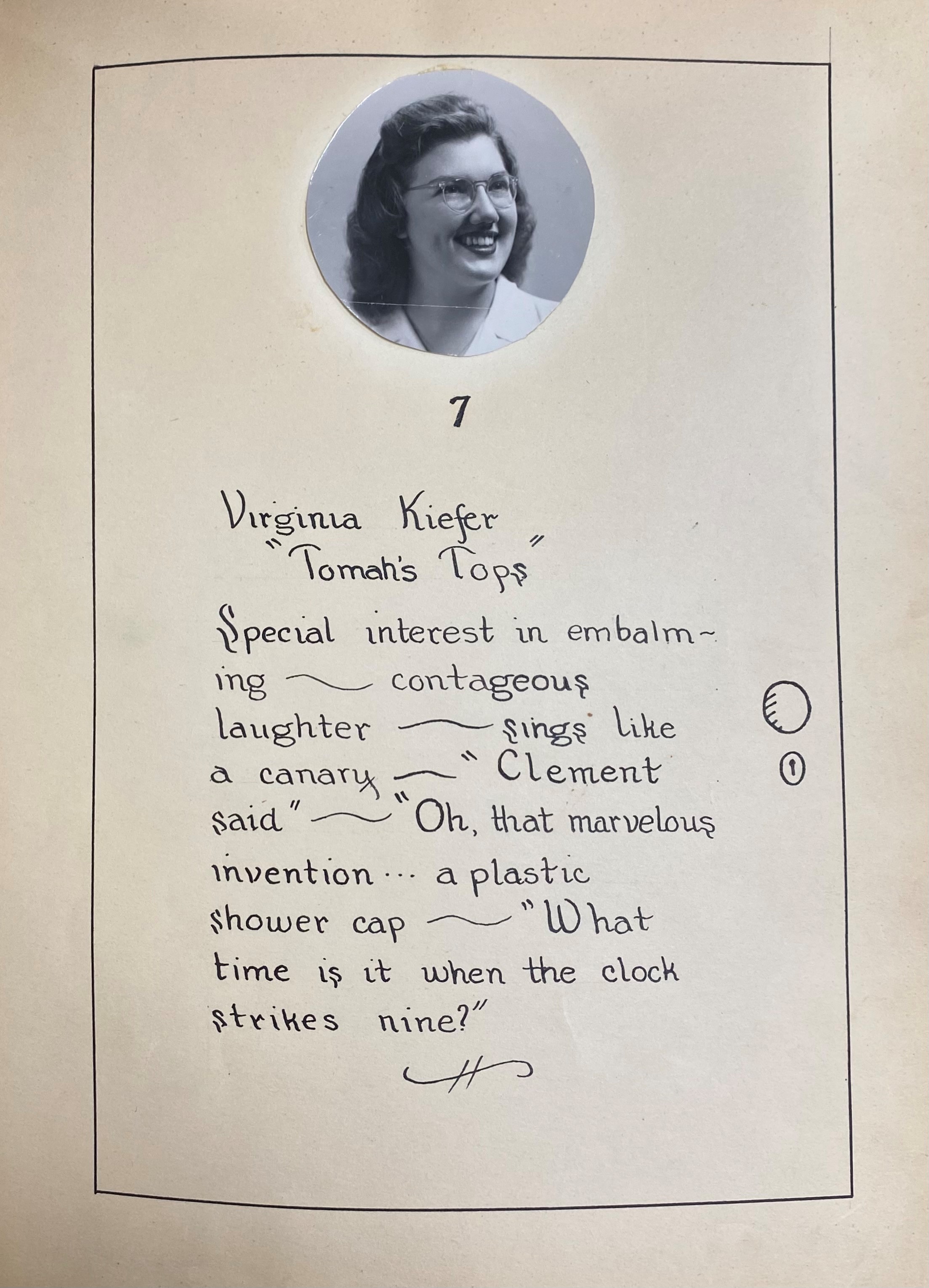 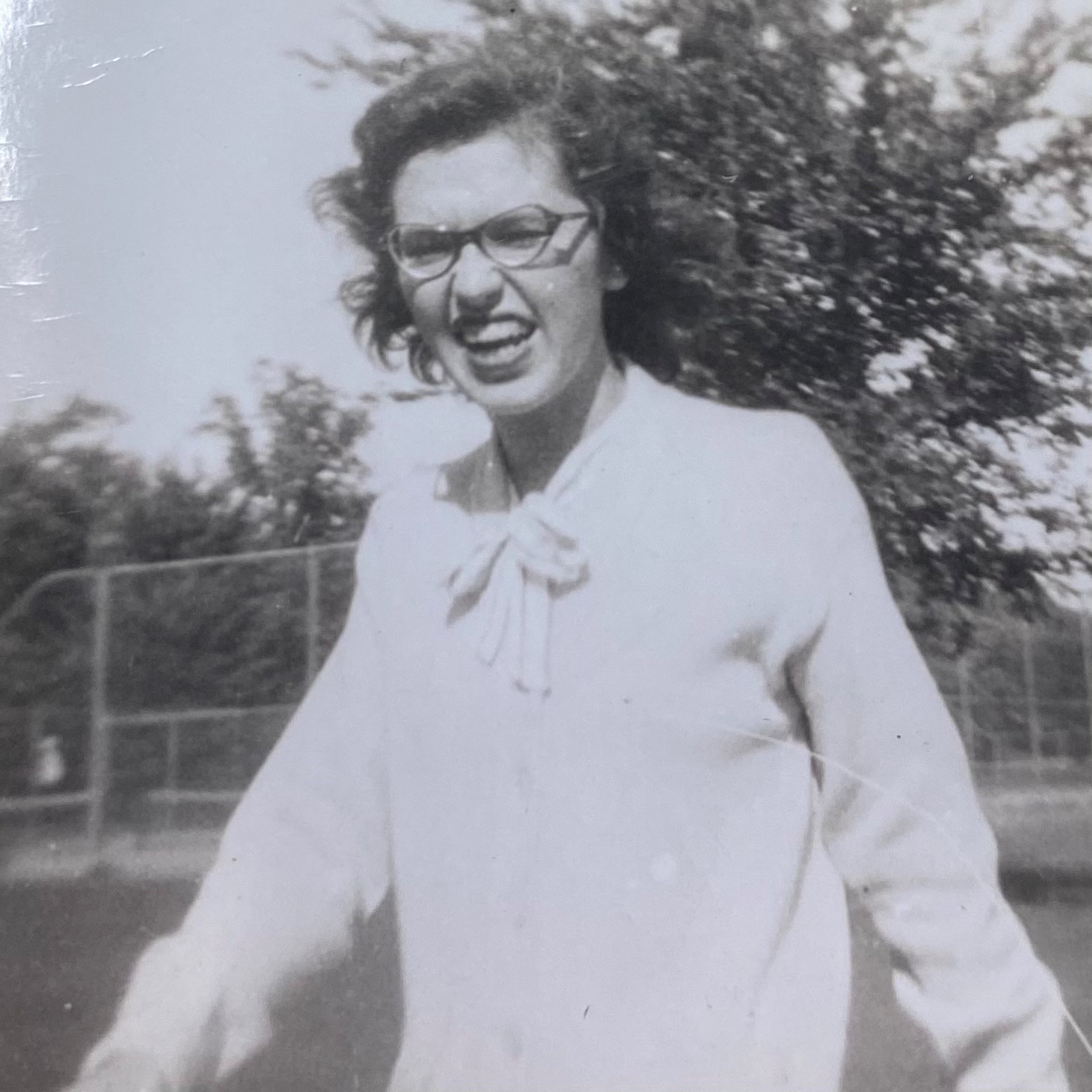 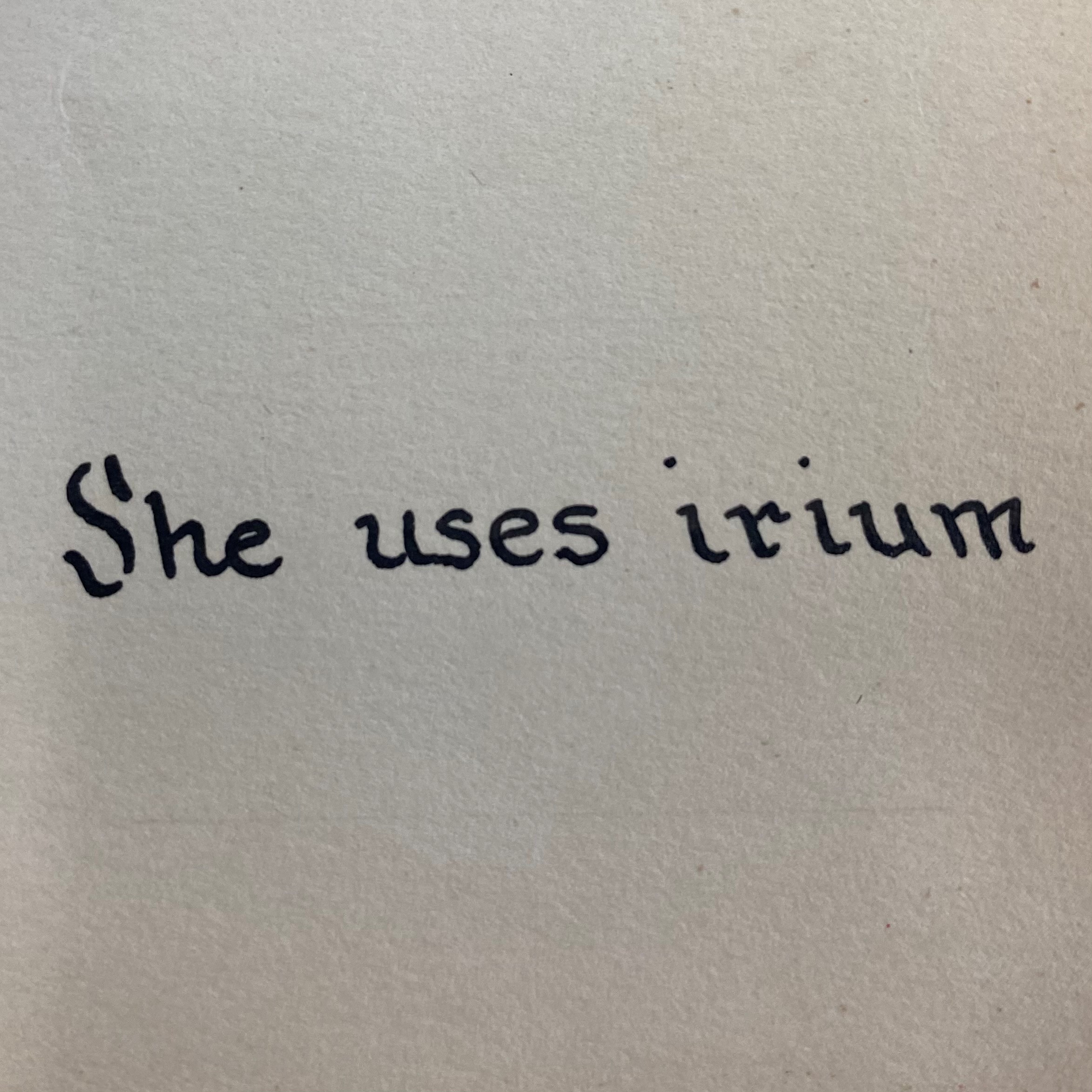 Plenty of items in the Edgewood College Archives have made their way into our history without the specific intention of their creators. That is to say, people who make things don't always consider  how an audience will interpret or react to that creation in the future. Slang, inside jokes, and references just beyond the reader/viewer’s grasp make historical items vivid and evocative, but we audiences like to savor the specifics, too. So remember to write down names, dates, and details in your photo albums! The combination of familiarity and strangeness might be the most captivating part of an object from the past.

If you enjoyed hearing about the Golden Age of Radio, be sure to check out Vintage Hitchcock: A Live Radio Play this weekend here at Edgewood College! Tune your campus radio to 100.1 FM or grab tickets for the performance in person at the Diane Ballweg Theater!

Want a closer look at the Marshallites-Towerites scrapbook, or anything else in our archives? It's easy to make an research request! Just contact the library via email and tell us what kind of materials you would like to view or the topic you are interested in. We also have many photos and materials available online on our Digital Collections page.