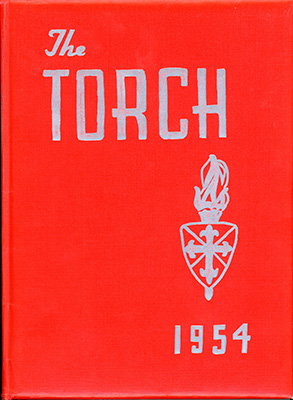 The Torch yearbook was published between 1944 and 1972. Until recently, the archives had at least one copy of almost every yearbook- we happened to be missing 1954. By chance, a copy of our only missing yearbook was found in the memorabilia collection held by the Edgewood College Alumni Office, and through their generosity, our collection is now complete! The 1954 Torch has joined its fellows in our physical archives and been fully digitized- with a searchable transcript- for our Digital Collections.

But the 1954 Torch is not the only hidden gem presented to the archives by the Alumni Office. If you browse the yearbooks in our Digital Collections by year, you will notice that there are no entries for 1945, 1957, or 1970. What about those missing yearbooks? It turns out that they aren't missing, they just never existed. For one reason or another, no yearbook was created for those three years- or so we thought. 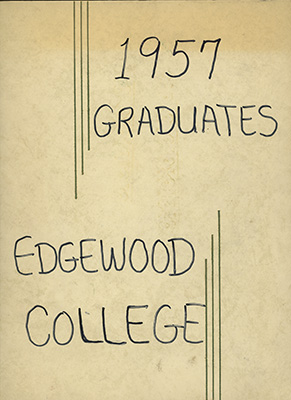 Mary Alice Clark Moore '57 stepped in to create her own version when insufficient funds prevented her class of seniors that from enjoying a traditional Torch. The Senior Memories 1957 photo album she made focuses on the Class of '57- their portraits, proms, studies, and social lives at Edgewood College. Unlike some volumes of The Torch, for which close to a dozen copies are safely preserved in the archives, this DIY yearbook is totally one-of-a-kind. Without people to preserve them, without the Alumni Office and the alumni themselves, unique objects and the memories they sustain might be lost. Special thanks are due to Rita Schmelzer Dufner '57 who identified Mary Alice as the creator of the album and to Alumni Relations Director Abby Bjerke who helped the album find its way to the archives.

Now, you can browse the pages of the Senior Memories 1957 album in our Yearbooks Digital Collection along with the rest of the yearbooks in our collection- including those published after The Torch ceased publication: the 1974-75 Edgewood College Journal, and three volumes of The Edge, 1990-1992. Looking for someone specific? Each yearbook has a searchable transcript! Just remember to include nicknames (Sue for Susan, Bill for William) and maiden names in your search, if known.